Many cases of Irritable Bowel Syndrome are self diagnosed or diagnosed by a professional with a kind of throw away explanation of IBS as there is no real test that can be undertaken to confirm that the patient is suffering from it. It can only be diagnosed by listening to patient symptoms. Professionals sometimes listen but do not hear! In many cases it is actually a case of lazy bowel and lifestyle that causes the discomfort experienced. There are many areas you may wish to look at in your lifestyle where just a small change or some forethought may make a huge difference.

There are many herbal remedies that have been used to alleviate the symptoms of IBS or of lazy bowel but it also important to understand lifestyle changes that you can make which can also help with marked and rapid effect.

MARSHMALLOW ROOT TEA is a demulcent and has emollient properties which make it useful in inflammation and irritation of the alimentary canal, but also for the urinary and respiratory organs. The dry roots boiled or steeped in water give out half their weight of a gummy matter like starch. Decoctions of the plant, especially of the root, are very useful where the natural mucus has been abraded from the coats of the intestines as so common in Irritable Bowel Syndrome of all three sub types. It is excellent in painful complaints of the urinary organs, exerting a relaxing effect upon the passages, as well as acting curatively. The action of Marsh Mallow root upon the bowels is unaccompanied by any astringency. 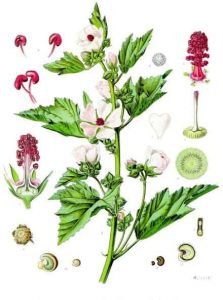 FENNEL TEA is thought to have antispasmodic qualities, to increase intestinal motility, and to have mild laxative effects. It is known to help with bloating and wind Fennel relaxes the smooth muscle lining of the digestive tract (making it an antispasmodic). It also helps expel gas. It kills some bacteria. In Germany, fennel is used like anise and caraway as a treatment for indigestion and gas discomfort. 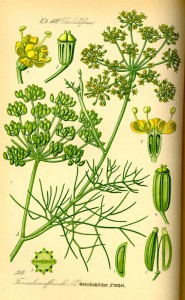 SLIPPERY ELM’S inner bark can be ground into a nutrient-rich gruel. One can survive on this gruel alone for a relatively short period. More importantly for Irritable Bowel Syndrome sufferers it also contains a mucilage that is an excellent remedy for inflamed intestinal tract (as well as sore throats as it happens ). It may be dried and ground to a powder, then made into a tea. Either the tea or the gruel may be used to soothe the digestive tract, such as with irritable bowel syndrome or gastritis. There re no known contraindications for Slippery Elm, since it consists mainly of mucilage and various nutrients; it is not technically a drug.

CHAMOMILE TEA has been drunk for centuries by people who’ve felt sick or stressed as a medicinal cure-all. Now, researchers in England have found new evidence that the popular herbal tea may actually help relieve a wide range of health ailments, including colds, IBS and menstrual cramps. Specifically, for the latter two, drinking the tea is also associated with an increase in urinary levels of glycine, an amino acid that has been shown to relieve muscle spasms. This may explain why the tea appears to be helpful in relieving Irritable Bowel Syndrome and menstrual cramps. Glycine also is known to act as a nerve relaxant, which may also explain why the tea seems to act as a mild sedative. 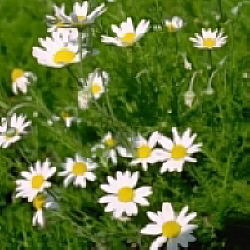 ARTICHOKE LEAF TEA is principally used as an aid to lower cholesterol but newer evidence shows that it may also have some soothing effects on inflamed intestinal tract as it has been used throughout Western Europe for centuries as an aid to digestion. Not enough research has been done in this field yet but folklore and tradition would suggest it is worth try. Aniseed is principally used as a digestif after over indulgence but its calming and gentle laxative properties and anti spasmodic attributes lends itself to helping with gas and bloating as well as helping to calm down inflamed intestinal tissue. 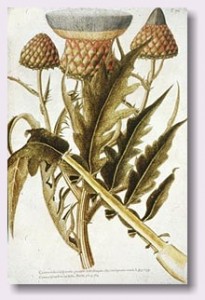 DILL WEED TEA like Fennel has positive effects on bloating and gas, helping to alleviate both.

BISTORT TEA also known as Adderwort, Dragonwort, Easter Giant, Easter Ledger, Easter magiant, Gentle Dock, Great Bistort, Osterick, Oysterloit, Passion Dock, Patience Dock (this name is also used for Rumex patientia), Patient Dock, Pink Pokers, Pudding Grass, Pudding Dock, Red Legs, Snakeweed, Twice-Writhen, and Water Ledges. may be taken to treat peptic ulcers, ulcerative colitis, and conditions such as dysentery and irritable bowel syndrome that give rise to diarrhoea. Bistort is occasionally used in cases of urinary problems such as cystitis and for upper respiratory congestion as well. One of the most strongly astringent of all herbs, bistort tea used topically is used to contract tissues and staunch blood flow. It makes a valuable mouthwash and gargle for treating spongy gums, canker sores, and sore throats, and is also useful as a wash for small burns and wounds, a douche for excessive vaginal discharge, and an ointment for haemorrhoids and anal fissures. It is its astringent qualities for which it is used in the treatment of Diarrhoea Predominant IBS (IBS-D) 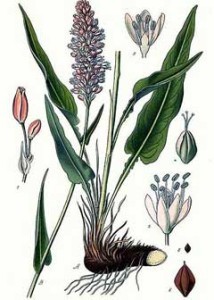 Other herbs/spices used are

Food intolerances may play a part in your condition but it is by no means a given, Be aware that grain and dairy intolerances are often blamed where no intolerance exists. Fibre, whilst important in any diet can be overdone and may cause discomfort as a result. Try to obtain your protein and carbohydrates from the widest possible range of food groups as possible. We are omnivores and have evolved that way—we should eat from every food group to maintain the best health. Try to concentrate on protein and just some carbohydrates during the evening and the other way round during the day if you lead a regular 9—5 type of lifestyle.

Bolting food down is one of the worst things you can do but your body will tolerate it for a good while. At some point it will not. The digestive process starts in the mouth and if you can ensure that the food you eat is well chewed then, when you swallow, your stomach does not have to work so hard to churn it before it gets into the small intestine where nutrients are extracted. If the food material is well chewed and a good consistency whilst in the small intestine, it will not stay there for long and moves into the large intestine easily where fluid is extracted or added. If the material is of a good consistency in the large intestine it does not have to work so hard and lumps of undigested food material will not cause the large intestines peristalsis action to be conflicted. The whole digestive transit will more frequent and cause less periodic gaps where gas, bloating and inflammation can occur.

Large portions often lead to weight issues and over work the body’s alimentary tract. It is always better to chew small portions well when you are hungry rather than labour over portions that are well beyond what you need to satisfy your hunger—that is simply greed. Combined with bolting food down, large portions will eventually lead to disorders that will take a long time to manifest themselves but when they do, will cause much distress and be difficult to overcome. Think airline portions and eat frequently throughout the day, chewing your food well, not rushing and always thinking you would quite like a little bit more when you’ve finished—but do not have any more. Its a discipline but one that is relatively easy to maintain once used to it and will cause no distress but will provide greater comfort.

Do not allow yourself to dehydrate. The recommended daily intake of water is two litres. Dehydration leads to tiredness, irritability and lack of concentration but also means that your body will take fluid from your tissues to provide enough to urinate and excrete and keep internal tissue healthy. If there isn’t enough then you will risk constipation and renal issues. Coffee and tea are both diuretics which means they make you pee more than you drink. Alcohol dehydrates you so do not think any fluid intake will suffice. If you find it difficult to drink a glass of water then do so when you are eating—its far easier to drink water during a meal and the lack of taste is far outweighed by the taste of the food you are eating. It will also help to fill you up more leading to eating smaller amounts as recommended.

It is thought that the following may trigger an attack so may be best avoided or kept to a minimum in your diet:-

Caffeine
Fatty Foods
Hidden ingredients like Fructose, Sorbitol etc in processed foods
Tomatoes (principally the seeds)
Chilly peppers
Aubergines (the tiny seeds and the skin as opposed to the flesh)