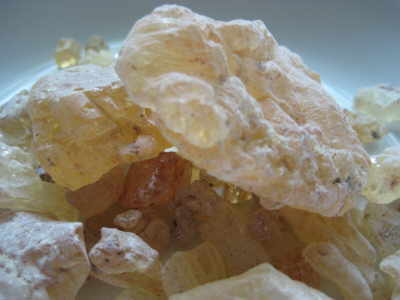 Copal is natural resin, with a white, pale yellow appearance and a scent reminiscent of frankincense and lemon. It is most often used as incense for cleansing and purification

The word copal comes from the Spanish word copalli which means incense, a task for which copal can in fact be employed. Polymerisation can progress significantly through the body of the resin. In some cases the surface of the copal fractures and crazes due to the surface shrinkage prompted through the initial evaporation of the turpenes.