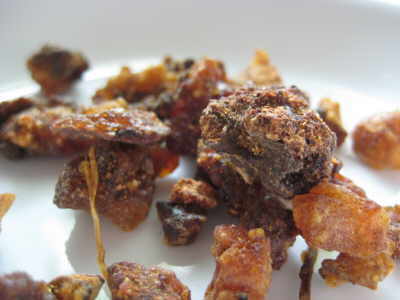 Opoponax Gum (Commiphora opoponax) is a subtle scented close relative of Myrhh and is mostly obtained from Kenya nowdays although a small amount exits through Ethiopia and Somalia occasionally.

It is prized in perfumery for its exotic and quite wonderful scent which a has a subtle aroma of balsamic orange with toffee, a touch of lavender perhaps, earthy and the rich dusky aroma of Myrhh itself. It is sometimes known as Sweet Myrhh or Bisabol Myrhh and rarely as Opobalsam and Bdellium.

Extraction of the opoponax is done through the tapping of trees just like frankincense and myrrh gums are; simply by making incisions in the bark and also by breaking off the twigs. A gum seeps out of these incisions which is the tree’s natural defenese which then solidifies to brown lumps over time. Purists suggest that deliberate scarring of the trees produces an inferior gum, forcing the tree to exude the gum in large quantities to protect itself whereas natural wind or weather damage or that produced by animal damage is far better as only small concentrated amount of gum is produced.

The History of Opoponax Gum:-

King Solomon was reputed to have regarded Opoponax Gum as the most noble of gums. Both Pliny (the elder) in his Historia Naturalis as Bactrian and Nubian Bdellium. and Dioscorides in his De Materia Medica were aware of the gum and recommended it although they are both uncertain in their descriptions and may have been referring to completely different species using the same name.

Various cultures used Opoponax Gum to guard against negative influences, strengthen the senses, and to increase awareness and intuition.

The name Opopanax derives from Anglo-Norman opopanac, from Latin opopanax.