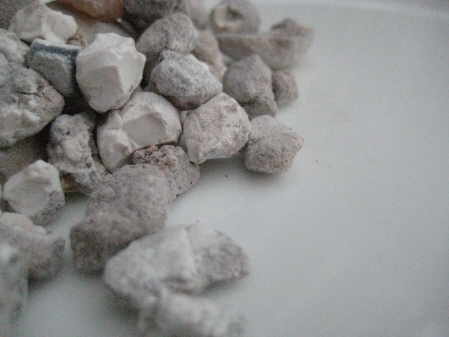 Tabashir sometimes known as Pearl Opal, is a native remedy to South India and Bengal.

It is a siliceous resin found in the nodes of some but not all female bamboo trees.

Bamboo is an edible grass that has been part of the diet of humans and animals alike for thousands of years.

Bamboo Tabashir has been used traditionally as a rich source of naturally occurring organic silica. Its silica content can be as high as 85% or more than 10 times the level found in the widely used Horsetail plant that contains about 5 – 7%. Besides silica, it contains iron, calcium, choline and betaine. This synergistic blending of mineral properties makes it an excellent and effective remineralizing agent useful in cases of osteoarthritis, painful joints, fragility of the cartilage (osteoporosis), hair or nails, and in prevention of the consequences of arteriosclerosis.

Not all bamboo stems contain the resin. Likely candidates are found by shaking bamboo stems, which can make the mineralized resin inside produce a rattling sound. These stems are then split open to extract the tabashir

Although a prominent component of the Ayurvedic system of medicine, it is thought that the use of tabashir originated with the Adivasi aboriginal tribes of India.

It was extensively exported from India for thousands of years, including through Arab traders during the medieval period. Thane was a clearing centre for the resin in the twelfth century. It was called σάκχαρον in the writings of Dioscorides, a Greek healer who practiced in Rome in the time of the emperor Nero.

Etymology and alternative names of Tabashir

Tabashir is referred to as Tvaksheera (त्वक्षीर) in Sanskrit which means bark milk Other Sanskrit-derived names have been applied to the resin as well, including bamboo sugar (vans-sharkar), bamboo camphor (vans karpoor) and bamboo manna. It is called Tian Zhu Huang in Mandarin, which means “heavenly bamboo yellow.”