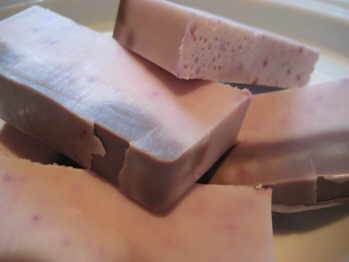 Luminescents soaps are Parabens and SLS free, gentle and moisturising for the skin, causing no dryness or irritation. We do not use any animal products and we don’t test our products on animals either.

Each cake of Bourbon Vanilla Handmade Soap contains vegetable glycerin for its moisturising attributes, a substance largely removed from commercial soaps as it has more value for the big commercial manufacturers as an additive in other products they make.

Bourbon, when attached to the name of a product, means that it comes from Reunion Island in the Southern Indian Ocean, some say, the home of the best vanilla although this editor thinks that Mexican Vanilla ( Vanilla is indigenous to Mexico and that country accounts only for 1% of the world’s production ) is the best but also comes at an incredible price as a result!

Vanilla is considered to be the most popular fragrance and flavouring in the world, most of which now comes from The Far East although Madagascar is the largest individual producer.

It is a vine: it grows by climbing over some existing tree, pole, or other support. It can be grown in a wood (on trees), in a plantation (on trees or poles), or in a “shader”, in increasing orders of productivity. Left alone, it will grow as high as possible on the support, with few flowers. Every year, growers fold the higher parts of the plant downwards so that the plant stays at heights accessible by a standing human. This also greatly stimulates flowering and fruiting but it requires the employment of artificial pollination outside its native habitat.