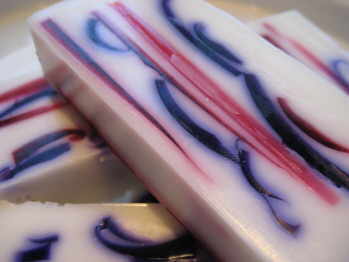 Luminescents soaps are Parabens and SLS free, gentle and moisturising for the skin, causing no dryness or irritation. We do not use any animal products and we dont test our products on animals either.

Each cake of Hyacinth Handmade Soap contains vegetable glycerin for its moisturising attributes, a substance largely removed from commercial soaps as it has more value for the big commercial manufacturers as an additive in other products they make.

Who doesn’t herald the onset of Spring with the hard to resist aroma given off by the newly blossoming hyacinth? Captured here in a pretty white soft moisturising body soap.

Floral scents are usually expensive as there a very few essential oils able to be obtained from flowers which, in general, do not produce them. Their aroma is a whole set of different chemical combinations designed by evolution to attract pollinators but that scent can be captured as an absolute oil which involves steeping thousands upon thousands of petals in a solvent over a period of time and thn once the solvent is evaoprated off, a thickish waxy concrete remains in which te scent has been captured in a very concentrated form.

I now have customers who use their as yet unused bars to scent their linen and bedding storage before using the bar in the bathroom. Its apparently very effective even if not the original intention