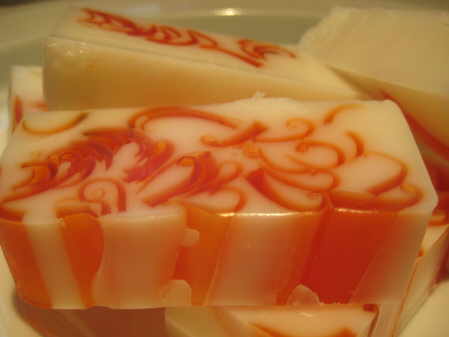 Luminescents soaps are Parabens and SLS free, gentle and moisturising for the skin, causing no dryness or irritation. We do not use any animal products and we dont test our products on animals either.

Each bar of Neroli Handmade Soap contains vegetable glycerin for its moisturising attributes, a substance largely removed from commercial soaps as it has more value for the big commercial manufacturers as an additive in other products they make.

Neroli handmade Soap is an ultra rich, SLS (Sodium Lauryl Sulphate) and Parabens free, relaxing, luxuriant and skin friendly glycerin soap with Neroli (Citrus aurantium) essential oil adding its own touch of luxury with its highly penetrating floral notes and a hint of citrus – Neroli is one of the most expensive oils, made entirely from the unopened buds of Orange Blossom and named after Princess Neroli of Naples in the 18th Century who wore it as a perfume

Neroli oil was discovered in the late 1600s and it was said to be named after Anne-Marie, Princess of Neroli, in Italy. The Roman god Jupiter gave an orange to his sister Juno when he married her, and brides have carried the blossom to calm nerves ever since. By the end of the 17th century, Anne Marie Orsini, duchess of Bracciano and princess of Nerola, introduced the essence of bitter orange tree as a fashionable fragrance by using it to perfume her gloves and her bathwater. Since then, the name of Neroli has been used to describe this essence.