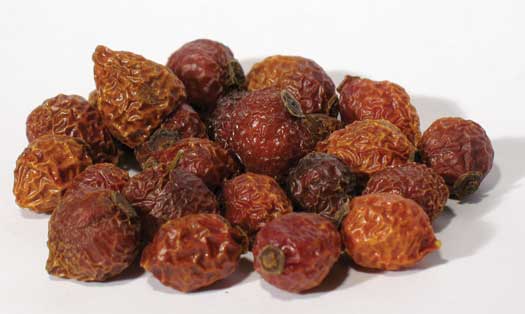 The Rose Hip or rosehips, also called the rose haw, is the pomaceous fruit of the rose plant. It is typically red to orange but may be dark purple to black in some species.

The hips of some species, especially Rosa canina (The Dog Rose), have been and continue to be used as a valuable source of Vitamin C. Rose hips are also commonly used as a herbal tea, often blended with hibiscus and as a carrier oil. They can also be used to make a jam, a jelly and a marmalade. Rosehip soup is especially popular in Sweden. Rhodomel, a type of mead, is made with the hips

Health Benefits and Uses of Rosehips:-

Rosehips are particularly high in Vitamin C, with about 17002000 mg per 100 g in the dried product, one of the richest of all plant sources.

The hips contain vitamins A, D and E, and antioxidant flavonoids.

As an herbal remedy, rosehips are attributed with the ability to prevent urinary bladder infections, and assist in treating dizziness and headaches.

Rosehips are commonly used externally in a carrier or cold pressed oil form ( which will go rancid very quickly ) to restore firmness to skin by nourishing and astringing tissue.

Rosehips are used for the creation of herbal tea, jam, jelly, syrup, beverages, pies, bread and marmalade, amongst others.