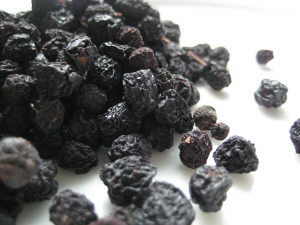 Like most dried berries, Sloes can sometimes develop a whiteish exterior coating which will easily wash off before use.

The Blackthorn (Prunus spinosa) , the fruit of which we call Sloe Berries is a deciduous large shrub or small tree growing to 5 m tall, with blackish bark and dense, stiff, spiny branches. The leaves are oval, 2–4.5 cm long and 1.2–2 cm broad, with a serrated margin. The flowers are 1.5 cm diameter, with five slightly creamy-white petals; they are produced shortly before the leaves in early spring, and are hermaphroditic and insect-pollinated.

The fruit, called a sloe (slae in Scotland) is a drupe 10–12 mm diameter, black with a pale purple-blue waxy bloom, ripening in autumn; it is thin-fleshed, with a very strongly astringent flavour when fresh.

It is frequently confused with the related Prunus cerasifera, particularly in early spring when the latter starts flowering somewhat earlier than P. spinosa. They may be distinguished by flower colour, creamy white in P. spinosa, pure white in P. cerasifera.

The flowers and fruit make a good tonic for diarrhoea and other bowel problems. Sloe syrup has anti-rheumatic properties and can help fight flu. The plant is also good for nosebleeds, constipation and eye pain. Sloe berries were first used by herbalists for treating stomach problems and blood disorders. They are still used in wine, gin and vodka as flavouring. Sloes can also be made into a paste for whitening teeth and removing tartar. The berries taste better and not so bitter if harvested after a few frosts.

Pick your sloes from blackthorn hedges in October or November when they are most ripe – best if using fresh berries to wait till the first frost and then hurry otherwise you will find others have beaten you to it – honestly – you’d be amazed how many people collect Sloes! Use the dried berries if you cannot find fresh or if you prefer them but bruise them. Use around 250 grams minimum to half a litre of alcohol

500ml of Gin or Vodka (whichever you prefer)

Drop the sloes into a clean and sterilised bottle, pour 120 grams of sugar into the bottle over the sloes and top up with alcohol.

Agitate (don’t shake vigorously) the bottle daily for a week, then weekly for a month or two … by which time it will be ready to drink (but it is really best kept until the next winter)

History and Folklore of Sloe Berries:-

It was believed that Christ’s Crown of Thorns was made from Blackthorn. In folklore to bring Blackthorn blossom into the home meant a certain death would follow. In Herefordshire and Worcestershire, in England, a wreath or globe of Blackthorn twigs would be scorched on a fire on New Year’s morning and then burned in a wheatfield in the furrows and its ashes scattered over the wheat. Then a new globe or wreath would be made and hung in the farmhouse kitchen ready for next year. It was believed that this ritual would rid the field of the devil. In a similar vein, Blackthorn would be scorched and hung up with mistletoe for good luck.

Blackthorn in bloom is considered an emblem of life and death together as the flowers appear when the tree has no leaves, just black bark and thorns. It is considered wise not to grow three trees closely together. It is said that a Hawthorn will destroy any Blackthorn near it. On the Isle of Man it is believed that if the Blackthorn and the Hawthorn have many berries then the ensuing winter will be severe.

In Irish folklore it was believed that the little people lived in Blackthorn bushes. Fairy tribes, called Lunantishees, are said to guard Blackthorn trees and will not let you cut branches off it on 11 November or 11 May – if you do you will be cursed with bad luck.

It was also bad luck to wear the flowers in your buttonhole. Another belief was that a Blackthorn wand with thorns fixed to the ends was harmful; while a carved rod carried by Devonshire witches was thought to cause miscarriage.

Nightingales are particularly fond of the Blackthorn and will congregate around the bushes.

Dried Sloes are not the most attractive of dried berries (many dried berries aren’t attractive at all) They are severely wrinkled and often have a bloom (like the bloom you find on growing black grapes) which is perfectly normal and even desirable, especially in Sloes. Plump dried berries like Cranberries for instance have been soaked in Sunflower oil and Corn syrup to give them their plump sweet appearance and texture. Thats the last thing you want from a natural product that hasn’t been tampered with at all – The Sunflower oil will eventually go rancid in any case and why would you want to sweeten something that is supposed to be tart? Our Elderberries are straigtht from the tree and dried – nothing else added or taken away – just the way you’d want them.