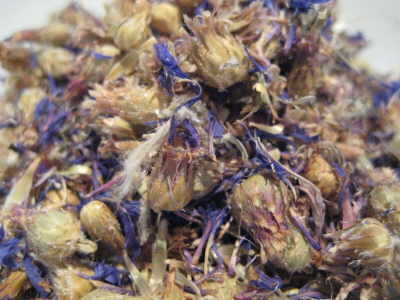 Blue Cornflower is a slender annual with grey-green leaves and lovely bright blue flowers. The flowers may also sometimes be pink, white or purple. It is native to Europe.

Blue Cornflower has traditionally been used to improve digestion, regulate the gall bladder, liver and kidneys as well as for menstrual disorders and to increase resistance to infections.

The tea made from it is sometimes used topically for effectively washing out wounds. It is used , often with great success on mouth ulcers but its major application is for the treatment of the eye area and is used for corneal ulcers, conjunctivitis (commonly known as pinkeye) and minor wounds. It is also sometimes added to shampoo and hair products.

Blue Cornflower has antibacterial as well as good antioxidant properties and is successful when included in eye products, since it has a gentle astringent effect, but also gently soothes inflamed and irritated skin.

It is a tradition that Earl Grey Tea should have a smattering of Blue Cornflower blended in with the bergamot infused tea leaves although this editor is not at all sure as to why!

It is a relatively expensive product to include in formulations.

In folklore, cornflowers were worn by young men in love; if the flower faded too quickly, it was taken as a sign that the man’s love was not returned.

In France the Bleuet de France (Cornflower) is the symbol of the 11th of November 1918 armistice and, as such, a common symbol for veterans similar to the Remembrance Poppies worn in the United Kingdom and in Canada and many other parts of the world involved in that conflict to cmmemorte the event. This is simply because alog with Flanders poppies, the Cornflower’s dormant seeds had been exposed by the shelling and once the war was declared to be over, the disturbed land abounded with both poppies and cornflowers.