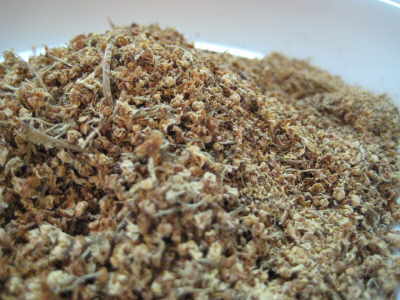 Elder Flower (Sambucus nigra) is a genus of between 5-30 species of fast-growing shrubs or small trees (two species herbaceous), formerly treated in the honeysuckle family Caprifoliaceae, but now shown by genetic evidence to be correctly classified in the moschatel family Adoxaceae.

Elder Berries are a very valuable food resource for many birds. Elders are used as food plants by the larvae of some Lepidoptera species including Brown-tail, Buff Ermine, Dot Moth, Emperor Moth, The Engrailed, Swallow-tailed Moth and The V-pug. The crushed foliage and immature fruit have a strong foetid smell.

Both Elder Flower and Eldrr Berries can be made into Elder wine, and in Hungary an Elder brandy is produced (requiring 50 kg of fruit to produce 1 litre of brandy). The alcoholic drink Sambuca is made by infusing Elder Berries and anise into alcohol. The berries are best not eaten raw as they are mildly poisonous, causing vomiting (particularly if eaten unripe). The mild cyanide toxicity is destroyed by cooking. The berries can also be made into jam, pies or Pontack sauce.

In Europe, Elder Flower is made into a syrup or cordial (in Romanian: Socat), which is diluted with water before drinking. The popularity of this traditional drink has recently encouraged some commercial soft drink producers to introduce Elder Flower-flavoured drinks.

Try adding some dried Elder Flower to a rhubarb crumble or gooseberry fool – you’ll be surprised at the result.