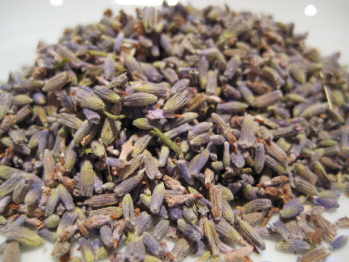 Lavender is a versatile and much underused herb for cooking. In today’s up market restaurants and bistros, fresh edible flowers are making a comeback as enhancements to both the flavour and appearance of food. It is also and more usually used herbally.

IMPORTANT – PLEASE READ: EDIBLE LAVENDER IS NORMALLY GREY WITH A HINT OF BLUE AND SMELLS VERY STRONGLY – DEEP BLUE LAVENDER IS DYED. DO NOT eat flowers from florists, nurseries, sellers showing bright blue lavender, or garden centers or do so at your own risk. In many cases these flowers have been treated with pesticides, not labelled for food crops and artificially coloured – They will also have a less strong aroma. Edible Lavender has been tested for microbial activity, is entirely free from any pesticidal intervention and is almost always greyish blue, not the bright blue of the dried Lavender bunches you see in florists which have usually had their colour augmented (dyed in other words) Such dyed Lavender is not suitable for ingestion AND COULD BE HARMFUL. Look at the picture on this page – that is the colour of the lavender you will be ordering.

As a member of the same family as many of our most popular herbs, it is not surprising that lavender is edible and that its use in food preparation is also returning. Flowers and leaves can be used fresh or dried, and both buds and stems can be used dried. Lavender is a member of the mint family and is close to rosemary, sage, and thyme. It is best used with fennel, oregano, rosemary, thyme, sage, and savory.

English Lavender (L. angustifolia in general and Munstead/Hidcote varieties, in particular when freshly picked) have the sweetest fragrance of all the lavenders and is the one most commonly used in cooking. The uses of lavender are limited only by your imagination. Lavender has a sweet, floral flavor, with lemon and citrus notes. The potency of the lavender flowers increases with drying. In cooking, use 1/3 the quantity of dried flowers to fresh. The key to cooking with lavender is to experiment; start out with a small amount of flowers, and add more as you go.

NOTE: Adding too much lavender to your recipe can be like eating perfume and will make your dish bitter. Because of the strong flavour of lavender, the secret is that a little goes a long way.

The lavender flowers add a beautiful colour to salads. Lavender can also be substituted for rosemary in many bread recipes. The flowers can be put in sugar and sealed tightly for a couple of weeks then the sugar can be substituted for ordinary sugar for a cake, buns or custards. Grind the lavender in a herb or coffee grinder or mash it with mortar and pestle.

Flowers look beautiful and taste good too in a glass of champagne, with chocolate cake, or as a garnish for sorbets or ice creams. Lavender lends itself to savoury dishes also, from hearty stews to wine-reduced sauces. Diminutive blooms add a mysterious scent to custards, flans or sorbets.