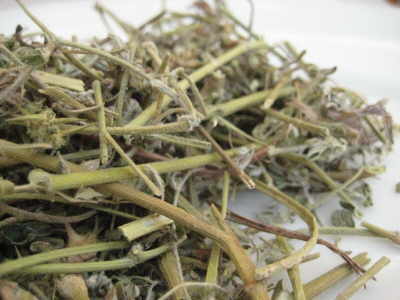 Tribulus terrestris is a common annual plant distributed throughout the world in areas that most other plants would find completely hostile and unable to survive. It is considered to be an invasive species in many parts of the globe and goes by many varied names including Goat’s Head, Bullhead, Caltrop, Bhakhdi, Bindii, Cats Head, Devil’s Eyelashes, Devil’s Thorn. Devil’s Weed, Puncture Vine, Tackweed, and Burra Gogharu and in China  – Bai Ji Li

About five days after flowering a fruit forms which falls apart very easily into five burs which are extremely hard and have between two to four tough spines. The spines are sharp and can do much damage and painful injury but are easily removed. Within each bur seeds form and characteristically the largest seed will germinate first whilst the other might well lie dormant until there is enough moisture for them, too, to germinate. The burs stick to the wool of domestic and farmed animals easily and can cause discomfort to the animal and damage the wool or infect the skin of the animal affected.

Ayurvedic discipline often uses the aerial parts (fruit and leaf) in the belief that they contribute to overall physical, as well as sexual, well being and strength by maintaining the health of all tissue.  It is believed to be useful in kidney, bladder, urinary tract and uro-genital related conditions.

In Chinese medicine it is considered a good all round tonic.

Many body builders use the plant in the belief that it increases overall levels of testosterone, however, there is no evidence that this happens at all.