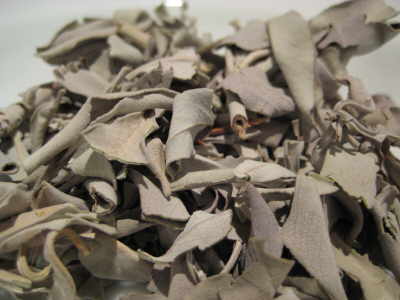 White sage (salvia apiana) is a cleansing and purifying herb and is a wild plant with spiky flowers growing along the sun-washed coastline of Southern and Baja California. It is also known as bee sage or sacred sage

The flowers are very attractive to bees, hence its specific epithet, apiana and the plant is known to have anti bacterial properties

White Sage is a cleansing and purifying herb and can be used to help break up feelings of negativity. Traditionally, it’s regarded as being able to open people up and bring about the ability to have a greater connection with the sacred world.

Its properties make it ideal for use in cleansing and clearing ceremonies of people, places and objects, as well as for meditation or prayer. People wanting to build a closer spiritual connection may also benefit from burning or carrying the herb.

It is frequently to be found bundled and bound into short stubby sticks known as smudging sticks.

Salvia Apiana is widely used by Native American groups on the Pacific coast of the United States. The seed was once a main ingredient of Pinole a staple food and a kind of maize meal often mixed with cocoa, agave, cinnamon, chia seeds, vanilla, or other spices.