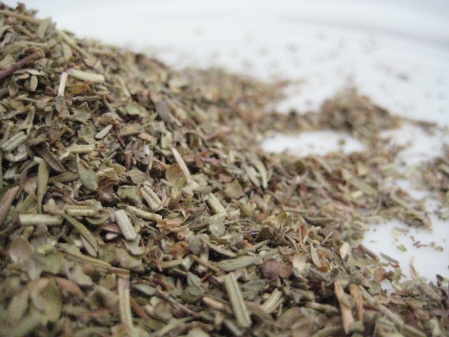 Herbes de Provence sometimes and perhaps better refered to as Provençal herbs is a mix of aromatic plants, typically, but not always, dried.

These herbs are native to and have their origins in the Provence region of southern France. The blend is often sold locally in considerably larger bags, of two or three litres size, than the typical herb sale of a 100 grams here because the mix is used all the time by locals. The price in Provence is also considerably lower than for typical herb sales in the rest of the Western world.

The mixture traditionally contains rosemary, marjoram, basil, savory, bay leaf and thyme. Sometimes, and with great effect, lavender flowers are included in the mix. The proportion of each herb varies depending on the manufacturer or the local herbalist, and additional aromatic plants are occasionally added. Typically thyme dominates the taste produced by the herb mixture.

Herbes de Provence is mostly used to flavour grilled foods such as fish and meat, as well as add flavour to vegetable stews. The mixture can be added to foods before or during cooking or mixed with cooking oil prior to cooking so as to infuse the flavour into the cooked food. It is rarely added after cooking is complete.