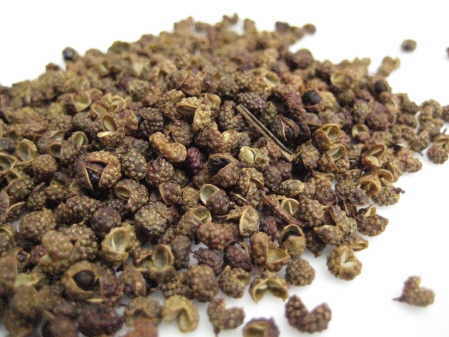 The rare Green Sichuan Pepper which is closely related to Red Sichuan Pepper but distinctly different in both aroma and taste being far more citrusy in nature, is the outer pod of the tiny fruit of a number of species in the genus Zanthoxylum widely grown and consumed in Asia as a spice. Despite the name, it is not related to black pepper or to chilli peppers. It is widely used in the cuisine of Sichuan, China, from which it takes its name, as well as Tibetan, Bhutani, and Japanese cuisines, among others.

Green Sichuan pepper has a unique aroma and flavour distinctly different from the tingly red variety in that it is aromatically much stronger in scent with heavy lemon fragrance and taste. Its not hot or pungent like black or white pepper, or chilli peppers, but creates in the mouth a kind of tingly numbness (caused by its 3% of hydroxy-alpha-sanshool) that sets the stage for these hot spices.