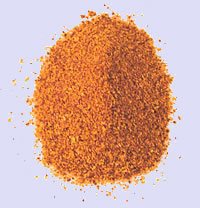 Ground Chilli which is simply dried and pulverized hot chilli peppers, the fruit of any of a number of hot varieties of the Capsicum plant of the nightshade family (Solanaceae). In cooking, a heaping teaspoon-full of chilli powder is an equivalent substitute for one “average” chilli which is precisely what this product is

Chilli Mix or Chilli powder is a spice mix consisting of various ratios of dried ground chilli peppers, cumin, garlic, and oregano. The ground chilli peppers may be exclusively hot ones such as cayenne or (rarely) just mild ones like paprika, but are usually a mixture of types to give the desired balance between heat and chilli flavour. As the name suggests, chilli powder is used to spice chilli as well as many other dishes.

The origins of the ground chilli can be traced to Indian cuisine, where it used extensively in making curries and other dishes. Apart from India, ground chilli as described above is widely used in Mexican cuisine as well.

There is some disagreement about the origin of manufactured chilli powder. The two men generally credited with marketing the first commercial chilli powder blends in the USA were William Gebhardt and D.C. Pendry. However chilli powder was handed down as a family recipe, as were the recipe for other spices and condiments, in India for a number of centuries.

Pendry ran a Mexican grocery supply company in Ft. Worth, Texas. He began manufacturing and marketing his blend of chilli powder in about 1890, encouraging its use by people who were unfamiliar with it by supplying recipes to restaurants in the area.

Gebhardt was a German immigrant to New Braunfels, Texas. He served chilli in his café, flavoured with his own blend of chilli powder. He starting selling the blend in about 1894 under the brand name Gebhardt’s Eagle Brand Chilli Powder.