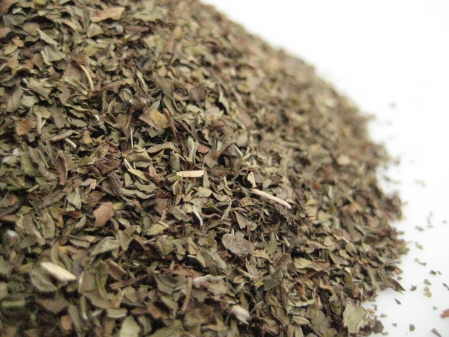 Garden Mint ( Mentha ) belongs to a  genus of about 25-30 species of flowering plants in the family Lamiaceae. According to Greek mythology, the plant was named after Minthe.

Mints are aromatic perennial herbs, growing to 10-120 cm tall, with wide-spreading underground rhizomes and erect, branched stems. The leaves are arranged in opposite pairs, simple oblong to lanceolate, often downy, and with a serrated margin. The flowers are produced in clusters (‘verticils’) on an erect spike, white to purple, the corolla two-lipped with four subequal lobes, the upper lobe usually the largest. The fruit is a small dry capsule containing 1-4 seeds.

Mint essential oil and menthol are extensively used as flavourings in drinks, chewing gum and desserts/sweets; and mint chocolate. The substances that give the mints their characteristic aromas and flavours are:

Pulegone: in Pennyroyal and Corsican Mint.

The mint family, Lamiaceae, includes many other aromatic herbs, including most of the more common cooking herbs, including basil, rosemary, sage, oregano, and catnip. In common usage, several other plants with fragrant leaves may be erroneously called a mint. Vietnamese Mint, commonly used in Southeast Asian cuisine, is not a member of the mint family at all, for example. In Central and South America, mint is known as yerbabuena (literally, “good herb”), and in Pakistan, it is called Podeena.

Menthol, a derivative of mint,is an ingredient of many cosmetics and perfumes. Menthol and mint essential oil are also much used in medicine as component of many drugs, and are very popular in aromatherapy. A common use is as an antipruritic, especially in insect bite treatments (often along with camphor).

It is also used in cigarettes as an additive, because it blocks out the bitter taste of tobacco and soothes the throat.

Culinary uses are so numerous but principally in the west Garden Mint is used as the main ingredient in Mint based sauces and jellies and herb blends but also in chutneys and pickles and anywhere where mint is required as a flavouring whilst in the east it is used only as an occasional ingredient in pastes.