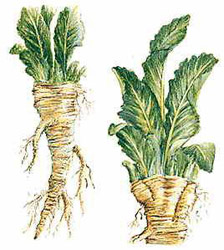 Horseradish is a perennial plant of the Brassicaceae family, which includes mustard and cabbages.

The plant is probably native to southeastern Europe and Western Asia, but is popular around the world today. It grows up to 1.5 metres (five feet) tall and is mainly cultivated for its large white, tapering root, although the leaves are also edible.

Its root is used as a vegetable or ground in a condiment called prepared horseradish, and has at times been used as the bitter herbs in the Passover meal in some Jewish communities. Horseradish, sometimes blended with cream and called horseradish sauce, is often served with roast or boiled beef or sausages, as well as smoked fish. Horseradish is also used in some prepared mustards. Also, much of what is styled wasabi is, outside of Japan, actually common horseradish dyed green.

The horseradish root itself has hardly any aroma. When cut or grated, however, enzymes from the damaged plant cells break down sinigrin (a glucosinolate) to produce allyl isothiocyanate (mustard oil), which irritates the sinuses and eyes. Once grated, if not used immediately or mixed in vinegar, the root darkens and loses its pungency and becomes unpleasantly bitter when exposed to air and heat..

Horseradish was cultivated in antiquity. Cato discusses the plant in his treatises on agriculture, and a mural in Pompeii showing the plant has survived until today. It is probably the plant mentioned by Pliny the Elder in his Natural History under the name of Amoracia, and recommended by him for its medicinal qualities, and possibly the Wild Radish, or raphanos agrios of the Greeks.

Both root and leaves were universally used as a medicine during the Middle Ages, and as a condiment in Denmark and Germany.

William Turner mentions horseradish as Red Cole in his “Herbal” (1551-1568), but not as a condiment. In “The Herball, or Generall Historie of Plantes” (1597), John Gerard describes it under the name of raphanus rusticanus, stating that it occurs wild in several parts of England. After referring to its medicinal uses, he says: “the Horse Radish stamped with a little vinegar put thereto, is commonly used among the Germans for sauce to eate fish with and such like meates as we do mustarde.”

It is still used this way in Jewish and Romanian cuisine, where a sweetened horseradish-vinegar sauce called chrain or hrean traditionally accompanies gefilte fish. There are two varieties of chrain “red” chrain and “white” chrain, i.e. mixed with or without red beet. It is also popular in Poland where it is called chrzan and in Hungary where they call it torma. Having chrzan or torma on the Easter table is a part of Polish and Hungarian Easter tradition. Variety with red beet also exists and it is called ?wik?a z chrzanem or simply ?wik?a.