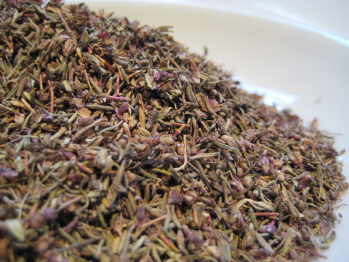 Lemon Thyme (Thymus citriodora) is one of a genus of about 350 species of aromatic perennial herbaceous plants and sub-shrubs to 40 cm tall, in the family Lamiaceae and native to Europe, North Africa and Asia. A number of species has some chemotypes. The stems tend to be narrow or even wiry; the leaves are evergreen in most species, arranged in opposite pairs, oval, entire, and small, 4-20 mm long. The flowers are in dense terminal heads, with an uneven calyx, with the upper lip three-lobed, and the lower cleft; the corolla is tubular, 4-10 mm long, and white, pink or purple.

Lemon Thyme is widely cultivated as a herb, grown for its strong flavour, which is due to its content of thymol (Huxley 1992). It retains its flavour on drying better than many other herbs. Lemon Thyme smells strongly of lemon and tastes like lemon. It can be used in any recipe calling for lemon juice, lemon zest or lemon flavouring. It grows like a weed so there is always more lemon waiting in the garden. Lemon Thyme  added to marinade  is great with fish or chicken. Lemon Thyme’s glossy green foliage can be sheared to form one of the knots in a traditional knot garden. If you want lemon flavouring without the thyme element though use Lemon Verbena – sheer lemon heaven!

Lemon Thyme is often used to flavour meats, soups and stews. It is used in French cuisine, where it is an important element in a bouquet garni, along with all other thymes, as well as in herbes de Provence. It is also widely used in Caribbean cuisine. In some Middle Eastern countries, the condiment za\’atar contains any thyme as a vital ingredient.

Lemon Thyme is added early in cooking so that its oils have time to be released.

The Ancient Egyptians used thyme in embalming. The ancient Greeks used it in their baths and burnt it as incense in their temples, believing that thyme was a source of courage. It was thought that the spread of thyme throughout Europe was thanks to the Romans, as they used it to purify their rooms. In the European Middle Ages, the herb was placed beneath pillows to aid sleep and ward off nightmares. (Huxley 1992). In this period, women would also often give knights and warriors gifts that included thyme leaves as it was believed to bring courage to the bearer.  Thyme was also used as incense and placed on coffins during funerals as it was supposed to assure passage into the next life.