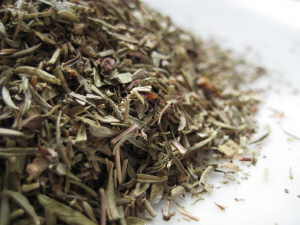 Winter Savory (Satureja montana) is a genus of about 30 species of annual or perennial herbs and sub shrubs in the family Lamiaceae, native to warm temperate regions of the Northern Hemisphere. They are low-growing plants, found in dry, sunny areas, and reaching 15 to 50 cm tall with small leaves 1 to 3 cm long. The flowers are produced in whorls on the stem, white to pale pink-violet.

It is most commonly used as a seasoning for green vegetables. Savory’s special affinity is for beans.  It is no coincidence that the German word for the herb is Bohenkraut, meaning bean herb, as one of the components of the herb naturally aids the digestion of these sometimes problematic legumes.

Savory is used in seasoning the traditional Acadian stew known as fricot.

Savory has a slight  peppery bite to it, although the summer savory is milder. It has been suggested to use this herb as a seasoning for salt-free diets as the strong flavour makes food more appealing.

Summer savory is an annual with small green leaves and pink flowers; Winter savory (this product) is an evergreen perennial. Both need sun and well-drained soil.

Savory’s popularity as a healing herb is nothing new. It has long been reputed to be a general tonic to the digestive tract, as well as a powerful antiseptic. Branches of the herb were tossed on the fire to create an aromatic disinfectant. Even today, because of its pungent oils, it is commonly used in toothpaste and soaps.

One of the most interesting claims concerns savory’s reputation as an aphrodisiac. It was the Roman naturalist and writer Pliny the Elder who, in the first century AD, gave the herb its name “satureja,” a derivative of the word “satyr” (the half-man, half-goat with the insatiable sexual appetite). According to lore, the satyrs lived in meadows of savory, thus implying that it was the herb that made them passionate. This belief persisted over the years, and even as recently as this century noted French herbalist Messeque claimed savory was an essential ingredient in love potions he would make for couples. As a boy his father told him it was “the herb of happiness.”