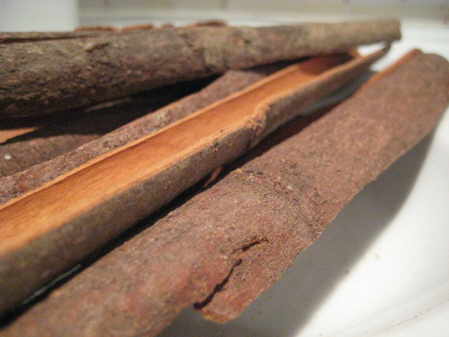 The Cinnamon is a small evergreen tree 10-15 m tall, belonging to the family Lauraceae, native to Sri Lanka and Southern India. The bark is widely used as a spice. It is grown elsewhere in the world, Zimbabwe being an up and coming supplier.

Although available throughout the year, the fragrant, sweet and warm taste of cinnamon is a perfect spice to use during the winter months.

Cinnamon has a long history both as a spice and as a medicine. It is the brown bark of the cinnamon tree, which is available in its dried tubular form known as a quill or as ground powder. The two varieties of cinnamon, Chinese and Ceylon, have similar flavour, however, the cinnamon from Ceylon (this product) is slightly sweeter, more refined and more difficult to find in local markets

The name cinnamon comes from Greek kinnám?mon, from Phoenician and akin to Hebrew qinnâmôn, itself ultimately from a Malaysian language, cf. Malay and Indonesian kayu manis “sweet wood”.

Its flavour is due to an aromatic essential oil which makes up 0.5 to 1% of its composition. This oil is prepared by roughly pounding the bark, macerating it in sea-water, and then quickly distilling the whole. It is of a golden-yellow colour, with the characteristic odour of cinnamon and a very hot aromatic taste. The pungent taste and scent come from cinnamic aldehyde or cinnamaldehyde and, by the absorption of oxygen as it ages, it darkens in colour and develops resinous compounds. Chemical components of the essential oil include ethyl cinnamate, eugenol, cinnamaldehyde, beta-caryophyllene, linalool and methyl chavicol.