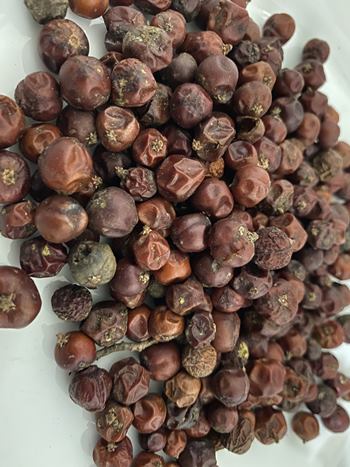 Eastern Red Cedar Berries are related to the rather more common Juniper Berries but are considered by most pundits to be far superior in flavour. They are mild without the turpentine notes and bitterness of common Juniper. They are almost sweet with a woodsy, piney flavour. … The berries can be eaten dried, fresh, chopped, or powdered.

Use them in cooking where Juniper Berries themselves are called for.

A tea can be made from the berries by steeping a tablespoon of them in boiling water for around 20 mins – it is considered useful in coughs and bronchial issues as well as a good gargle for minor mouth infections.

Eastern Red Cedar is not considered to be toxic but, like most Junipers, the tree contains small levels of toxins which would only be dangerous if ingested in very large quantities.