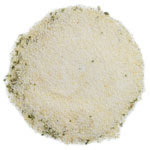 Garlic (Allium sativum) is a perennial plant in the family Alliaceae and genus Allium, closely related to the onion, shallot, and leek.

Used as a condiment – it is simply salt and fine ground garlic blended into a fine accompaniment and seasoning.