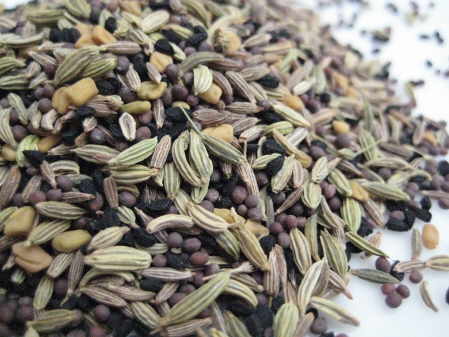 Some variations include wild onion instead of cumin, while others also include radhuni seed in addition. However, punchpuram (Panch Phoron) is a slight misnomer when applied to blends that include radhuni (Trachyspermum roxburghianum syn. Carum roxburghianum), since in Oriya or Bengali puchpuram literally means “five spices”.

In the tradition of Oriya and Bengali cuisine, one usually first fries the punchpuram in cooking oil or ghee, which causes them to start popping immediately. At this point, one adds vegetables (especially potatoes), lentils, or fish to the cooking vessel to coat with the spice mixture.

In Bengal, the cradle of this mixture, a spice called radhuni is sometimes used, not mustard seed. A better replacement for radhuni, hardly available outside of Bengal, would be celery seed.

Punchpuram is usually used to season fish or vegetable rather than meat dishes.

Wipe the fish dry, sprinkle both sides with the salt and turmeric, and set aside to marinate for 5 minutes. Heat oil in a pan and saute the fish until golden brown on both sides and cooked through. Set fish aside.

Using the same oil, saute the panchpuram until it all starts to crackle and pop. Add the potato and eggplant and saute until well coated with the spices. Add the water and simmer until the vegetables are tender. Add fish and chilies and at the last minute to heat through again. Serve with plain rice and garnish with coriander and mint.