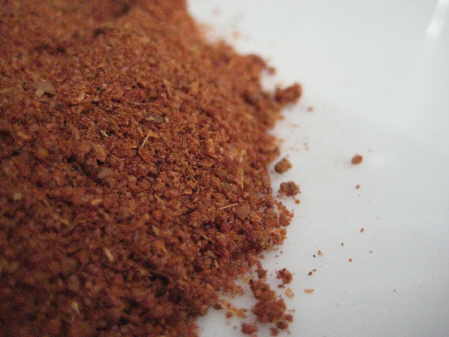 Mix with salt and lemon juice  or salt and yoghurt to make a thick paste and coat the meat ( once generally thought as only chicken but can be used with any meat or seafood to tell you the truth ) and allow to marinade.

Use with bread crumbs to make a spicy colourful coating for frying chicken.

The term Tandoor represents a variety of different ovens, the most commonly known is a cylindrical clay or metal oven used in cooking and baking. The tandoor is used for cooking in Southern, Central and Western Asia, as well as in the Caucasus.

A Tandoor traditionally uses charcoal or wood to generate its heat, burning within the tandoor itself, thus exposing the food to live-fire, radiant heat cooking, and hot-air, convection cooking, and smoking by the fat and food juices that drip on to the charcoal; some of those techniques being replicated in modern gadgetry in the west today.

Temperatures in a Tandoor oven can approach 480 °C (900 °F), and it is common for the ovens to remain lit for long periods to maintain the high cooking temperature. The design really hasn’t;t changed in centuries although modern Tandoors are made of metal and not clay all the more often.