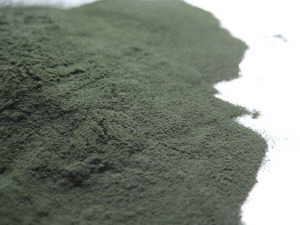 Chlorella Powder is an algae full of chlorophyl and a potential food source (similar to Spirulina) because it is high in protein and other essential nutrients; when dried, it is about 45% protein, 20% fat, 20% carbohydrate, 5% fibre, and 10% minerals and vitamins.

The name Chlorella is from the Greek, chloros, meaning green, and the Latin diminutive suffix ella, meaning small.C

It is a potential food source because it is so high in proteins and other many other essential nutrients.

Mass-production methods are now being employed to cultivate Chlorella in very large artificial circular ponds such is the demand. It is also abundant in calories and vitamins.

When first harvested, it was thought that Chlorella, being an inexpensive protein supplement for the human diet and it certainly is a very good supplement but not yet inexpensive.

Advocates sometimes focus on other supposed health benefits of Chlorella algae though, such as claims of cancer pevention or weight control and even immune system boosting capabilities but there really isn’t any evidence at all that Chlorella has any of these attributes or any disease remedial properties at all – It is simply an extremely nutritional substance that can help maintain a healthy lifestyle in today’s modern world. Modern parlance might term it a “Superfood”

In the late 1940’s and 1950’s there were global fears that drastic and sudden human population expansion would mean it would be impssible to support the increasing human population with  traditional food substances. Chlorella and other algae like Spirulina were thought to be a new and promising primary food source and as a possible solution to the then-current world hunger crisis.

Many people during this time thought hunger would be an overwhelming problem and saw algae as a way to end this crisis by providing large amounts of high-quality food for a relatively low cost. It hasn’t proved either to be the case that it was required nor that it is inexpensive to produce.