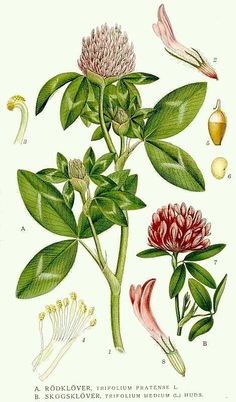 Red Clover (Trifolium pratense) is a species of clover, native to Europe, Western Asia and Northwest Africa but now naturalised all over the world. It was introduced to South America just 100 years ago. One of the main pollinators of the plant is the large Garden Bumblebee (Bombus ruderatus) which didn’t exist in South America until it, too, was introduced for the sole purpose of polinating red clover – an important crop. The same story applies to New Zealand.

It is a herbaceous perennial plant, very variable in size, growing to 20-80 cm tall. The leaves are trifoliate (with three leaflets), each leaflet 15-30 mm long and 8-15 mm broad, green with a characteristic pale crescent in the outer half of the leaf; the petiole is 1-4 cm long, with two basal stipules. The flowers are dark pink with a paler base, 12-15 mm long, produced in a dense inflorescence 2-3 cm diameter.

The plant was named Trifolium pratense by Carolus Linnaeus in 1753. Pratense is Latin for “found in meadows”.

It is widely grown as a fodder crop, valued for its nitrogen fixation which increases soil fertility. Several Cultivar Groups have been selected for agricultural use, mostly derived from var. sativum. It has become naturalised in many temperate areas, including the Americas and Australasia as an escape from cultivation.

The isoflavones and phytoestrogens from Red Clover have been used to treat the symptoms of menopause. Women who are pregnant and breastfeeding should avoid ingesting Red Clover. It has also been reported that red clover can be used for therapeutic purposes for coughs, bronchitis, eczema, sores, scrofula and can be gargled for mouth ulcers and sore throats.

It is the national flower of Denmark and the state flower of Vermont.