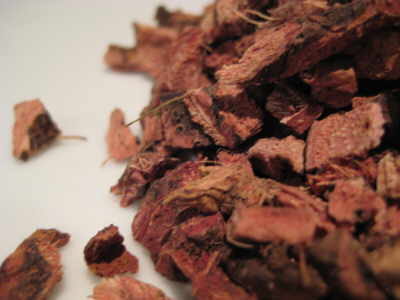 Blue Flag Root is from Iris versicolor which is a perennial herb with large blue flowers with yellow and white markings at the base of the sepals. It grows in wetlands in eastern and central North America and is cultivated in many other parts of the world. Its stout stem grows from a thick, cylindrical creeping rootstock (rhizome) and bears two ranks of sword-shaped long, narrow leaves. Each stem has two or three large blue or purplish flowers featuring three petal-like, spreading or recurved sepals below and three petals, smaller than the sepals, above.