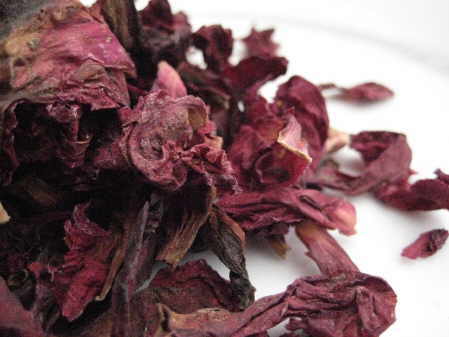 Paeonia officinalis, also called the common peony, wild peony or garden peony and from which these peony petals are obtained, is a species of flowering plant in the family Paeoniaceae, native to France, Switzerland and Italy. It is an herbaceous perennial growing to 60–70 cm in height with leaves divided into 9 leaflets, and bowl-shaped deep pink or deep red flowers, 10–13 cm in diameter, in late spring (May in the Northern Hemisphere)

In herbalism it is the roots and seeds of the plant that are most used and the flowers retained for decorative purposes although fresh they can be included in salads.

The superstitions connected with the Peony are all too numerous. In ancient times, it was thought to be of divine origin, an emanation from the moon, and to shine during the night, protecting shepherds and their flocks, harvests and driving away evil spirits whilst also thought to avert tempests.

Josephus speaks of the Paeony as a wonderful and curious plant. He says – according to Gerard – that ‘to pluck it up by the roots will cause danger to he that touches it, therefore a string must be fastened to it in the night and a hungry dog tied thereto, who being allured by the smell of roasted flesh set towards him may pluck it up by the roots.’

‘that of necessity it must be gathered in the night, for if any man shall pluck of the fruit in the daytime, being seen of the woodpecker, he is in danger to lose his eyes.’

‘But all these things be most vainc and frivolous, for the root of Peionne may be removed at any time of the yeare, day, or houre whatsoever.