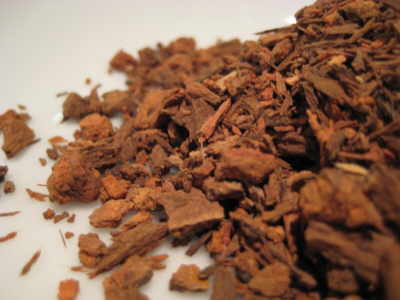 It is sometimes called Luciano malo

Quebracho Bark is one of the common names, in Spanish, of at least three similar species of trees that grow in the Gran Chaco region of South America. It is sometimes called Luciano malo

These species provide tannin and a very hard, durable timber. It is sometimes used as a commercial name for the tannin derived from the trees, or their timber. The etymology of the name appears to be Spanish, derived from quiebrahacha, meaning axe-breaker in fact, It’s Spanish translation literally is The axe breaks”

The extract derived from its bark contains antioxidant compounds so potent, they are believed to have destroyed even more free radicals than other comparable material.

The tannic acid, in the form of alkalized salts, was extensively used as a deflocculant in drilling muds in 1940s-1950s, until it was replaced with lignosulfonates. Its red colour gave the mixture the name red mud

ORAC is a method of rating the antioxidant capacity of foods. The higher the ORAC rating an item has, the higher its antioxidant activity. About 400 mg of quebracho extract per day supplies 5,200 ORAC units. NSI® The Bark Extract is a powerful antioxidant that may offer numerous health benefits, including cardiovascular, immune and vision health, and may also support healthy aging.

The bark extract may support cardiovascular health and blood circulation by helping to strengthen blood vessel walls and capillaries, and by helping to prevent stress-induced constriction of arteries and blood clotting. It supports healthy aging by helping protect collagen and maintain elastin, which contribute to healthy skin, joints, blood vessels, ligaments, tendons, muscles and hearts. In addition, quebracho bark extract may also enhance healthy brain function and the capacity to exercise, while it works to relieve inflammation.