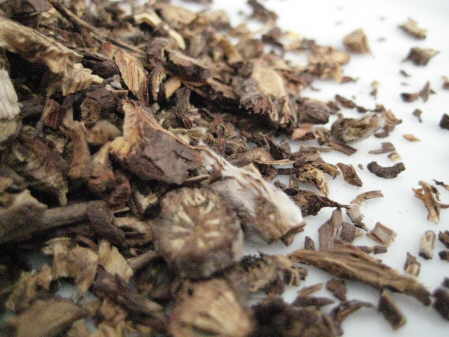 Pulsatilla chinensis is known in China as Bai Tou Weng but is also known in the West as Chinese Anemone or the root is sometimes known as White Haired Old Man. It is one of the 50 Chinese fundamental herbs.

The herb is thought to help in detoxification and to lower fever. It is most commonly taken as a tea to battle infection within the gastro-intestinal tract. It is anodyne, anti-inflammatory, antispasmodic, astringent and sedative. It is considered to be an effective treatment for bacterial and amoebic dysentery. In China it is also used in the treatment of malaria, nose bleeds and haemorrhoids and is used externally to treat Trichomonas vaginitis.

Harvested in the autumn or before the plant comes into flower in the spring, it is dried for later use. It contains the lactone protoanemonin which has an irritant and antibacterial action. Protoanemonin is destroyed when the plant is dried.

The herb is a considered a cardiac and nervous sedative, producing a diminution of the senses followed by a paralysing action. A constituent similar to digitalis can be extracted from the whole herb with the roots removed. This is cardiotonic.