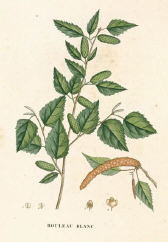 Birch Leaf (Betula pendula Roth and Betula. pubescens) is used to make a pleasant tasting tea that is a diuretic used in ‘irrigation therapy’ for the treatment of bacterial and inflammatory conditions of the lower urinary tract.

This effect is due to several of the flavonoids found abundantly in the leaves. It is additionally used to help pass kidney stones – mainly due to its strong diuretic affect although it is always recommended that plenty of fluid should also be taken to avoid dehydration and the BirchLleaf tea is also said to relieve symptoms of gout.

Traditionally, Birch Leaf tea was also used as a blood purifier, to prevent hair loss and externally as a wash for skin rashes and complaints and as a hair conditioner.

The Birch is associated with the feast of Pentecost in Central and Eastern Europe, and most of Russia, where its branches are used as decoration for churches and homes on this day.

The Birch is sometimes known as the oldest tree in Britain and is considered a pioneer species because when the ice caps retreated, it mved in on the devastated land, growing quickly and then rotting to leave more fertile earth in which other species of plant could take over. In its rapid life cycle birch pushes upward too fast to develop a strong heart wood, but this makes it perfect for some woodwork products

Birch sap is full of fructose and is cool, refreshing and clear and very easy to tap. It is often used in almost all parts of Europe to make a wine or cordial from but also to flavour beer or spirits.