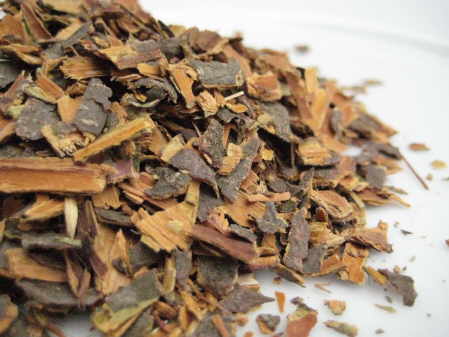 Rhamnus frangula from which Buckthorn Bark is obtained is also commonly known as the Alder Buckthorn, Glossy Buckthorn, or Breaking Buckthorn and is a tall deciduous plant native to Europe, The northern parts of Africa, Western Asia China and Siberia. It has been naturalised in North America for around two centuries. It has now been labelled an invasive species.

It is related to Cascara. The bark and to a somewhat lesser extent, the fruit, is used for much the same purpose, as a gentle laxative but in needs to be harvested and dried and then stored for about twelvemonths before use. Fresh bark is a stong and violent purgative and the dried bark if taken in excess can cause stomach and belly cramps. Like all laxatives, they should not to be taken regularly but only when needed and never overdose on them.

The second century AD Greek physician, Galen,  wrote of alder buckthorn, although he did not distinguish clearly in his writings between it and other closely related species. All of these plants though, were credited with the power to protect against witchcraft, demons, poisons, and headaches in his time.