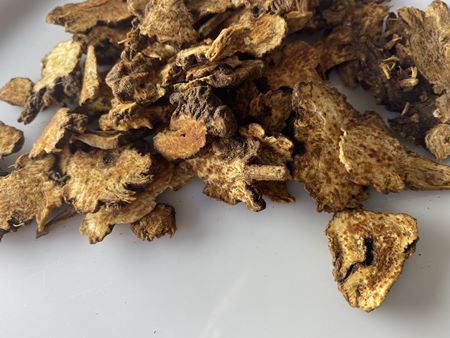 The Herb is distinguished from bái zhú which is the white atractylodes rhizome from Atractylodes macrocephala, which is typically a cultivated plant , whereas Cāng zhú more often tends to be collected from the wild.

It is believed that the distinction between cāng zhú and bái zhú emerged in relatively modern times; a single drug “zhú” described in the Shen nong ben cao jing probably included many Atractylodes species.

In traditional Chinese medicine the herb is described as spicy or pungent, bitter, warm, and aromatic, acting on the spleen and stomach.

A number of effects of the herb are described as ways of “drying dampness” by traditional Chinese herbalists as described below. None of these are endorsed or approved by the editor and are given as a TCM guide.

It is also used: