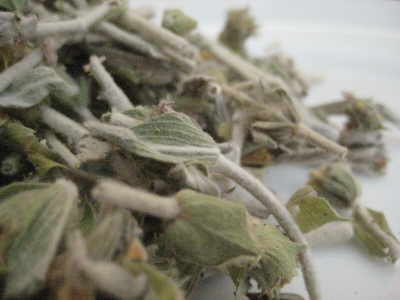 Greek Mountain Tea (Sideritis scardica) is also known as Ironwort, Mountain tea and Shepherd’s tea, or just plain Sideritus is well known for its use as a herbal medicine, most commonly in tea form. The plants are abundant in Mediterranean regions, particularly in the Balkans and the Iberian peninsula  but can also be found in Central Europe and temperate Asia.

It is extremely popular in Greece and Albania but also well known in Kosovo (where this editor first tried it) Bulgaria and Macedonia. It is used as a herbal tea or for its aromatic properties in local cuisines. The herbal tea is commonly with honey and lemon.

Greek Mountain Tea has been traditionally used to aid digestion, and to strengthen the immune system (rather like we would use echinacea)  and is therefore used to fight common colds and influenza but it is also used to calm mild stress and anxiety. It is considered to be a relaxing tea.

It is known to be anti microbial , anti inflammatory and packed full of anti oxidants  Active chemical elements include diterpenoid and flavanoids.

A lot of research has been undertaken on the herb confirming its popular use in helping with colds, flu, and allergies. Most of this research has taken place in universities in the Netherlands and in Greece, Turkey, Macedonia, Bulgaria, and Albania, where the plant is indigenous.