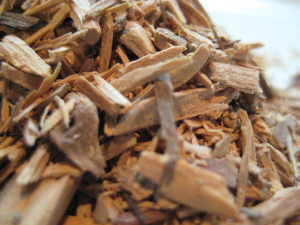 Muira Puama (Ptychopetalum olacoides, Ptychopetalum uncinatum), sometimes known as Potency Wood, is a small Brazilian tree that grows across the Amazon river basin. It has a long history of use in Brazilian folk medicine as an aphrodisiac.

It is often used, in conjunction with Catuaba bark, Gingko Biloba and sometimes Damiana as a decoction to combat male erectile dysfunction and impotency.

Historically, all parts of Muira Puama have been used medicinally, but the bark and roots are the most-utilised parts of the plant. It has long been used in the Amazon by indigenous peoples for a number of purposes. Native peoples along the Brazilian Amazon’s Rio Negro river use the stems and roots from young plants as a tonic to treat neuromuscular problems; a root decoction is used in baths and massages for treating paralysis and beri-beri; and a root-and-bark tea is taken to treat sexual debility, rheumatism, grippe, and cardiac and gastrointestinal weakness.

It is also valued as a preventive for baldness. In Brazilian herbal medicine, Muira Puama still is a highly-regarded sexual stimulant with a reputation as a powerful aphrodisiac. It has been in the Brazilian Pharmacopoeia since the 1950s. It is used as a neuromuscular tonic for weakness and paralysis, dyspepsia, menstrual disturbances, chronic rheumatism (applied topically), sexual impotency, grippe, and central nervous system disorders.

Muira Puama is employed around the world today in herbal medicine. Early European explorers noted the indigenous uses and the aphrodisiac qualities of the plant and brought it back to Europe, where it has become part of herbal medicine in England. It is still listed in the British Herbal Pharmacopoeia (a noted herbal medicine source from the British Herbal Medicine Association); it is recommended there for the treatment of dysentery and impotence. It is also used in Europe to treat impotence, infertility, nerve pain, menstrual disturbances, and dysentery. In Germany, it is employed as a central nervous system tonic, for hookworms, menstrual disturbances, and rheumatism.