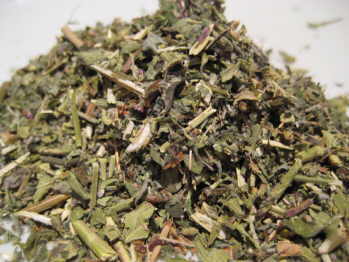 Nepeta or Catmint is a genus of about 250 species of flowering plants in the family Lamiaceae. The members of this group are known as Catnips or Catmints due to its famed liking by cats. Nepeta pleasantly stimulates cats’ pheromonic receptor.Actualy most of the mint family does too.

The genus is native to Europe, Asia, and Africa, with the highest species diversity in the Mediterranean region east to mainland China. It is now common in North America as a weed. Most of the species are herbaceous perennial plants, but some are annuals. They have sturdy stems with opposite heart-shaped, green to grayish-green leaves. The flowers are white, blue, pink, or lilac and occur in several clusters toward the tip of the stems. The flowers are tubular shaped and are spotted with tiny purple dots.

There is a lemon scented Nepeta (Nepeta citriodora) but that is seldom used herbally, however both are used as culinary herbs. Several other species exist.

Also, oil isolated from catnip by steam distillation is a repellent against insects, in particular mosquitoes, cockroaches and termites. Research suggests that in a test tube, distilled nepetalactone, the active ingredient in Catnip (Nepeta), repels mosquitoes 10 times more effectively than DEET, the active ingredient in most insect repellents, but that it is not as effective as a repellant on skin. It also contains significant quantities of Iridodial

A tea or an infusion made from the herb is a very pleasant tasting beverage which will relax, reduce fevers and have an anti-catarrhal action. This makes it particularly useful for colds and ‘flu. It will also settle the digestion most effectively but avoid if you suffer from Acid Reflux – Nepeta contains an Oesophagal relaxant.

It can be smoked as a herbal cigarette ingredient which makes a pleasant menthol like flavour to tobacco or just by itself however research shows that it does not encourage relaxaton when taken in this form.