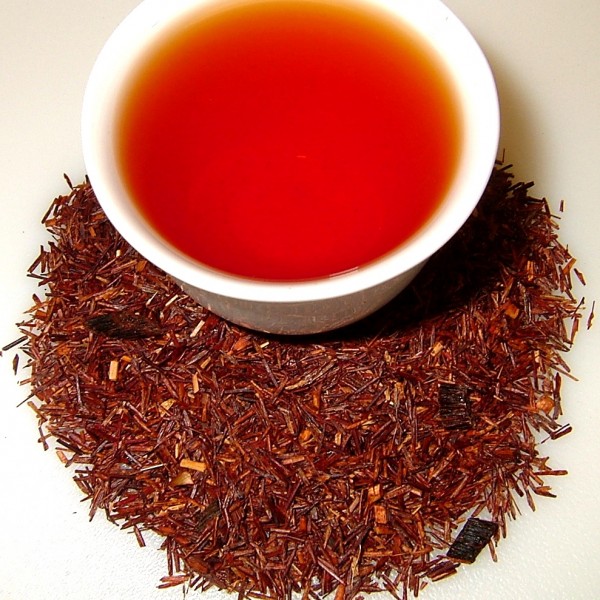 Rooibos (Afrikaans for red bush) (scientific name Aspalathus linearis) is a member of the legume family of plants and is used to make an infusion or ptisane (herbal tea). Commonly called African Red Tea, the product has been popular in South Africa for generations and is now consumed in many countries.

In South Africa it is more usual to drink rooibos with milk and sugar, but elsewhere it is usually served without. The flavour of rooibos tea is often described as being sweet (without sugar added) and slightly nutty. Preparation of rooibos tea is essentially the same as black tea save that the flavour is improved by longer brewing. The resulting brew is a reddish brown color, perhaps explaining why rooibos is sometimes referred to as “red tea.”

Rooibos is becoming more popular in Western countries particularly amongst health-conscious consumers, who appreciate it for its high level of antioxidants and lack of caffeine. Recently in South Africa several coffee shops began selling red espresso, which is concentrated rooibos served and presented in the style of ordinary espresso (which is normally coffee based). This has given rise to rooibos related variations of coffee drinks like red lattes and red cappuccinos.

Although rooibos was first reported in 1772 by botanist Carl Thunberg, the Khoisan people of the area had been using it for ages and were aware of its medicinal value. The Dutch settlers to the Cape adopted rooibos as an alternative to black tea, an expensive commodity for the settlers who relied on supply ships from Europe. Until the 19th century, however, Dutch usage of the tea was minimal.

In 1903, Benjamin Ginsberg (a Russian settler to the Cape and descendant of a famous tea family) realised the potential of rooibos and began trading with the local Khoisan people who were harvesting it. He sold his “Mountain Tea” to settlers in the Cape and shortly became the first exporter of rooibos using contacts from the family tea business.

In the 1930s, Ginsberg convinced a local doctor to experiment with cultivation of the plant. The attempts were successful, which led Ginsberg to encourage local farmers to cultivate the plant in the hope that it would become a profitable venture. The first attempts at large volume cultivation were a disaster due to the small size of the seeds. They are no larger than a grain of sand and so were difficult to find and gather. This resulted in the seeds soaring to an astounding £80 a pound, which was far too expensive for local farmers.

Fortunately for Ginsberg, who employed collectors of the seeds, one woman had found a rather unusual source of supply. While other collectors only brought in matchbox-sized quantities of the seed, she continually delivered large bags and was eventually persuaded to share her secret. She chanced upon ants dragging seed one day, while she was searching for the minute seeds. She followed their trail back to their nest and, on breaking it open, found a granary.

Since then, rooibos has grown in popularity in South Africa and since about 2002 or so, has gained considerable momentum in the worldwide market. There are now (as of early 2007) a growing number of brand-name tea companies which sell this tasty tea either straight or as a componant in an ever-growing variety of blends.