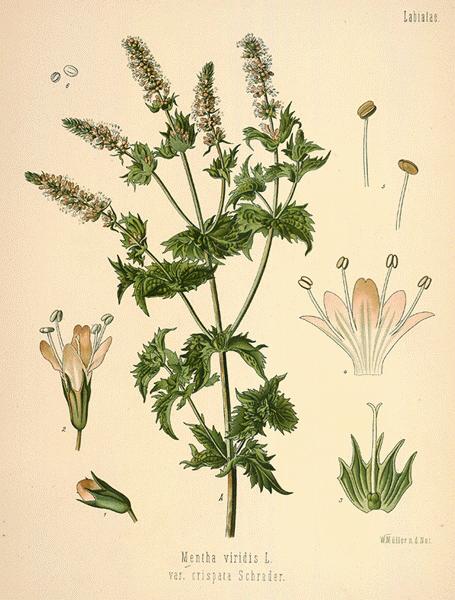 Spearmint (Mentha spicata) is a species of mint native to central and southern Europe, where it grows in wet soils. It is an herbaceous perennial plant growing 30 to 100 cm tall, with leaves growing 5-9 cm long and 1.5-3 cm broad, having a serrated margin. The flowers are produced in slender spikes, each flower pink or white, 2.5-3 mm long and broad.

It is widely stated that the name comes from the “spear” shaped leaves. Its leaves are, however, no more “spear” shaped than any other mint leaf. A more probable source for the name is the monastic order of St Pierre, whose monks are thought to have cultivated the herb.

Spearmint is grown for its aromatic and carminative properties.It grows well in nearly all temperate climates. Gardeners often grow it in pots or planters due to its invasive spreading roots. The plant prefers partial shade, but can flourish in full sun to mostly shade. Loamy soils with plenty of organic material are best suited to spearmint.

When growing spearmint for culinary purposes, fertilize with a well balanced fertilizer, organic composts, or manure. To harvest for culinary purposes, simply cut the branches, leaving a minimum of a third of the branch, which will encourage the plant to re-grow. It should be noted that the leaves will lose their aromatic appeal after the plant flowers. Some cultures wrap the spearmint in long strips of bacon to add flavour. Spearmint leaves can be used whole, chopped, or dried.

The cultivar Mentha spicata ‘Nana’, the Nana mint of Morocco, possesses a clear, pungent, but mild aroma and is an essential ingredient of Touareg Tea.

Spearmint is used as a flavouring for toothpaste and confectionery. In herbalism, spearmint is steeped as tea for treatment of stomach ache and as a remedy for overindulgence.