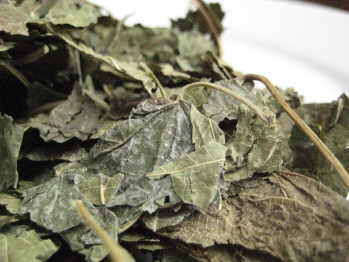 The White Mulberry (Morus alba) is a species native to Northern China where its cultivation has been so long that it precedes any recorded history of it. It is a short lived tree on which the silkworm feeds. Other species are often confused with it such as the Black Mulberry (Morus nigra) but it is easy to tell from the leaves of the White Mulberry which species it is because it has no hairs on the  lower leaf surface whereas the Black Mulberry does.

Its fruit is poisonous when unripe.

A good pinch of mulberry leaf steeped in boiled (not boiling water – let the bubbles stop first otherwise you will scald the leaf) and brewed for a few minutes is all it takes and drink thoughout the day. It is not at all unpleasant and is often used as a cordial.