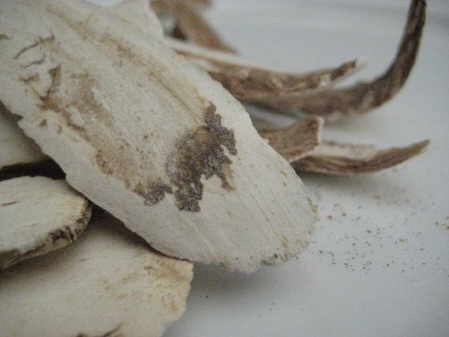 Also known as Chinese Angelica (as is Dong Quai), the Garden Angelica, Root of the Holy Ghost, and Dahurian Angelica

Angelica dahurica, commonly known as Wild Angelica or in China as Bai Zhi is a wildly grown species of angelica native to Siberia, Russia Far East, Mongolia, Northeastern China, Japan, Korea, and Taiwan. It  grows predominantly near river banks, along streams and among rocky shrubs.The root of the plant is widely used for its medicinal properties and is known to contain furanocoumarins and angelicotoxin

It is also known as Chinese Angelica, the Garden Angelica, Root of the Holy Ghost, and Dahurian Angelica

The medicinal properties of Wild Angelica root has been dated back to Ancient China as early as 400 BC. Zhang Cong Zhen (1156–1228), a famous physician in the military, believed that diseases were caused by external evil factors, or pathogens, that entered the human body.

He listed Wild Angelica as a herb that purges the body of any negative influences such as heat, clamminess, dryness, and cold on the skin. Today, the roots are used for other numerous treatments of illnesses such as headaches, relieving nasal obstruction, detoxification of the blood, as a pain reliever, an anti-inflammatory, a laxative, sedative, anti-fungal cream for skin, as well as treating swollen gums and toothaches.

The herb is frequently used by the Chinese as a strengthening treatment for the heart, spleen, liver and kidneys. Both men and women use the herb as a general blood tonic.

It should be avoided in large doses and used only under professional supervision.

Aside from the medicinal properties that this plant offers, this species also contain furocoumarins which increases skin sensitivity to sunlight and may cause dermatitis.

Another compound called the angelicotoxin, is an active ingredient within the root. This has an excitatory effect on the respiratory system, central nervous system, and the vasculomotor system of the body. It is known to increase the rate of respiration, blood pressure, decrease pulse rate, increases saliva production and induces vomiting. In large doses, the toxin can induce convulsions and paralysis