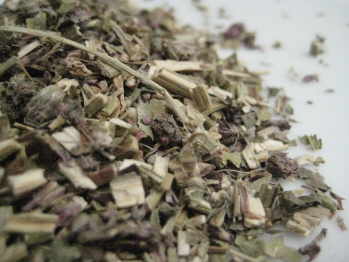 Also known as Bishopswort or Woundwort

Wood Bettony (Betonica officinalis) was held in high regard throughout the Middle Ages and more so in Ancient Greece and Rome where Antonius Musa, chief physician to the Emperor Augustus, wrote a long treatise, showing it was a certain cure for no less than 47 diseases.

It is a pretty woodland plant, seen frequently throughout England, but by no means common in Scotland. Though generally growing in woods and copses, it is occasionally to be found in more open situations, and amongst the tangled growths on heaths and moors.

It is sometimes known as Bishopswort or Woundwort

Wood Betony was once the sovereign remedy for all maladies of the head, and its properties as a nervine and tonic are still acknowledged, though it is more frequently employed in combination with other nervines than alone. It is useful in hysteria, palpitations pain in the head and face, neuralgia and all nervous affections.

In the Medicina Britannica (1666) it says: ‘I have known the most obstinate headaches cured by daily breakfasting for a month or six weeks on a decoction of Betony made with new milk and strained.’

As an aromatic, it also has an astringent and alterative action, and combined with other remedies is used as a tonic in dyspepsia and as an alterative in rheumatism, scrofula and impurities of the blood.

A weak infusion forms a very acceptable substitute for tea, and in this way is extensively used in many localities. It has a similar taste of tea and all the good qualities of it, without the bad ones. To make Bettony tea, pour half a litre of boiled (not boiling) water on 30 grams of the dried herb. A wineglass of this decoction three times a day proves a benefit against languid nervous headaches.

The dried herb may also be smoked as tobacco, combined with Eyebright and Coltsfoot, for relieving headache.

A pinch of the powdered herb will provoke violent sneezing. The dried leaves formed an ingredient in Rowley’s British Herb Snuff, which was at one time quite famous for headaches.

The fresh leaves are said to have an intoxicating effect. They have been used to dye wool a fine yellow.