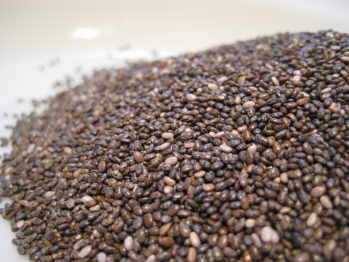 chia, is a species of flowering plant that belongs to the same family as mint, (It is actually a Sage)  and is a native plant of Mexico and Guatemala, the seeds of which have been marketed as a “superfood” as it is rich in omega 3 fatty acids. It has been cultivated since the pre-Columbian era and it has been suggested that it has always been regarded as an important food crop, similar in importance to Maize to indiginous South American peoples.

It is still used and is very popular in Bolivia, Paraguay, Argentina, Brazil, Guatemala and Mexico where it is regarded as a nutritious ingredient and food source.

According to the USDA, a 28 gram serving of chia seeds contains 9 grams of fat, 5 milligrams of sodium, 11 grams of dietary fibre,  4 grams of protein, 18% of the recommended daily intake  of  calcium, 27% phosphorus and 30% manganese. These nutrient values are similar to other edible seeds, such as flax or sesame seeds and thus the term “superfood” is somewhat laboured.

In 2009, the European Union approved chia seeds as a “novel food” allowing up to 5% of a bread product’s total matter.

Chia seeds may be added to other foods as a topping or put into smoothies (in a similar fashion to the way Tukmuria seeds are often used in India, as they exude a gelatinous substance as soon as wet), cereals, yogurt.