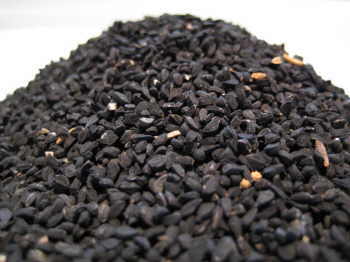 Nigella Seed can refer to the seeds of either of two quite different plants, both of which are used as spices:
Bunium persicum, similar to caraway in shape or Nigella sativa (this product) which is more common in The West

Nigella Seed has a pungent bitter taste and a faint smell of strawberries. It is used primarily in sweets and liquors. The variety of naan bread called Peshawari naan is as a rule topped with Nigella seeds. In herbal medicine, Nigella has hypertensive, carminative, and anthelminthic properties.

Nigella Seed has been used for centuries, both as a herb and pressed into oil, by people in Asia, Middle East, and Africa for medicinal purposes. It has been traditionally used for a variety of conditions and treatments related to respiratory health, stomach and intestinal health, kidney and liver function, circulatory and immune system support, and for general overall well-being.

In Islam, it is regarded as one of the greatest forms of healing medicine available. Muhammad once stated that the black seed can heal every disease– except death