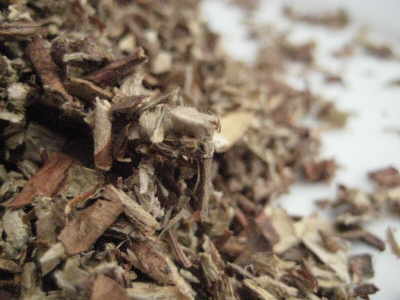 Daphne mezereum, perhaps better known as February Daphne, Mezereon, Mezereum, Spurge Laurel or Spurge Olive  is a garden familiar deciduous shrub growing about 1.5 m tall. The leaves are soft, 3–8 cm long and 1–2 cm broad, arranged spirally on the stems. The flowers which are extremely fragrant are produced in early spring on the bare stems before the leaves appear. They have a four-lobed pink or light purple (rarely white) perianth 10–15 mm diameter, and are strongly scented. The fruit is a bright red berry 7–12 mm diameter.

It is very toxic for humans, though fruit-eating birds like thrushes are immune and eat them, dispersing the seeds in their droppings.

Daphne mezereum is very toxic because of the compounds mezerein and daphnin present especially in the berries and twigs, very little in the leaves. If poisoned, victims experience a choking sensation. Handling the fresh twigs can cause rashes and eczema in sensitive individuals. Despite this, it is commonly grown as an ornamental plant in gardens for its attractive flowers. The native wild version became a protected species in the UK in 1975 under the Conservation of Wild Creatures and Wild Plants Act.

Daphne Mezereum has been used in the past for treating rheumatism and indolent ulcers, but it is very toxic and is no longer considered to be a safe herb to use internally. The plant contains various toxic compounds, including daphnetoxin and mezerein, both of which are currently being investigated as possible valiuable assets in the fight against leukemia.

The bark is cathartic, diuretic, emetic, rubefacient, stimulant and vesicant. The root bark and stem bark were used and are most active medically. It is mostly been used in an ointment today to induce discharge in indolent ulcers and also has a beneficial effect upon rheumatic joints. The bark is not usually taken internally and even when used externally this should be done with extreme caution and not applied if the skin is broken. The sap of the plant can cause a severe dermatological reaction.

The bark is harvested in the autumn and dried for later use. The fruits have sometimes been used as a purgative. A homeopathic remedy is made from the plant. It is used in the treatment of various skin complaints and inflammations.

A yellow to greenish-brown dye is obtained from the leaves, fruit and bark

Cautions:- Not advised to use unless under the guidance of or the treatment by a qualified practitioner. Should be avoided completely during pregnancy