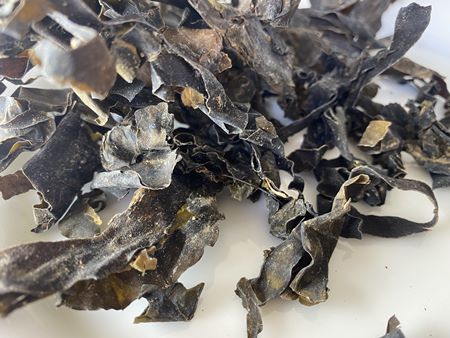 Kun Bu (Laminaria Japonica or Saccharina japonica) is a marine species of the  (brown algae) – a type of kelp or seaweed, which is extensively cultivated on ropes between the seas of China, Japan and Korea.

It is widely eaten in East Asia and is a commercially important species.  It is also called Asian Kelp in the West and ma-konbu in Japanese, dasima in Korean. Large harvests are produced by rope cultivation which is a simple method of growing seaweeds by attaching them to floating ropes in the ocean.

The species has been cultivated in China, Japan, Korea, Russia and France.  It is one of the two most consumed species of kelp in China and Japan. Laminaria japonica is also used for the production of alginates, with China producing up to ten thousand tons of the product each year.

Asian Kelp is a good source of marine minerals, including potassium, magnesium, calcium and iron. It is also an excellent source of iodine. Kelp also contains vitamins and cell salts essential for good nutrition and often a better source than meat, whole milk or eggs.