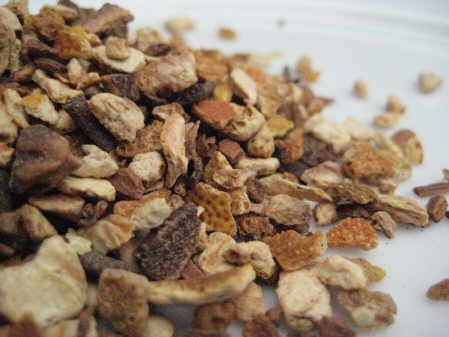 Mulled wine is a European concept which is usually, but not necessarily,  made with red wine along with various spices for mulling the beverage and occasionally fruit such a citrus and candied raisins or peel. all sweetened with sugar or honey. Sometimes cider or ale is used instead of wine and a non alcoholic version is usually made with apple juice.

It is considered to be a warming festive winter drink with Christmas and Halloween associations.

It is not a modern phenomenon. Wine was first recorded as spiced and heated in 2nd Century Rome. As Roman civilisation spread  across Europe through conquest and colonial expansion and trade, so the legions brought their culture with them. The legions brought wine and viticulture with them up to the Rhine and Danube rivers and to the Scottish border, along with their recipes.

The Forme of Cury, a medieval English cookery book from 1390, attributed to the Court or Richard the Second mentions mulled wine, saying: “Pur fait Ypocras …” and lists the grinding together of cinnamon, ginger, galangal, cloves, long pepper, nutmeg, marjoram, cardamom and grains of paradise (“spykenard de Spayn”, rosemary may be substituted).

This is then mixed with red wine and sugar and brought to a low heat but not boiled.