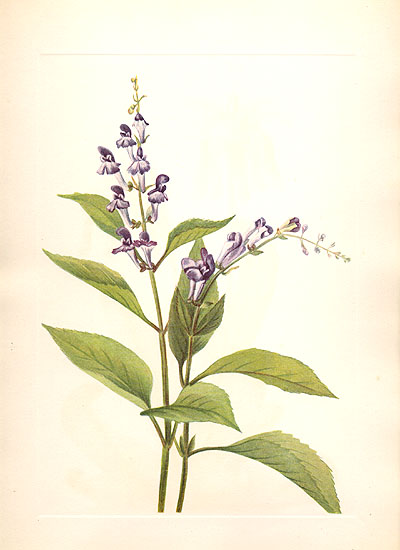 Skullcap (Scutellaria lateriflora) is a perennial which grows up to a metre tall, with opposite, serrated ovate leaves and one-sided racemes of stunning pale blue flowers which bloom from July to September. These are two-lipped, the upper in the shape of a helmet and the calyx surviving to cover the seeds. It grows in wet ground in north-eastern North America.

Constituents and Traditional Uses for Skullcap:-

It is an anticonvulsive, sedative, nervine, central nervous relaxant and restorative, antispasmodic and is used in cases of chorea, hysteria, nervous tension states. Specifically indicated in grand mal.

Scutellaria relaxes states of nervous tension and has a specific use in the treatment of seizure and hysterical states. It is of value in all exhausted or depressed conditions and may be used to treat pre-menstrual tension. It is useful in insomnia and nervous headaches. Its bitter taste is also strengthening and stimulating to the digestive system.

Native Americans used Skullcap to promote menstruation, and it was reputed to be effective against rabies, hence some of its common names. It is a traditional European treatment for epilepsy. Homeopaths have reported some success in the use of this plant to treat chronic fatigue syndrome. The common skullcap, Scutellaria galericulata (L.), of northern temperate zones is often used as a substitute and shares many of the effects of S. lateriflora. Chinese physicians use the root of Scutellaria baicalensis (Georgi), or huang qin, as an antibacterial, diuretic, antispasmodic and promoter of bile flow. It is helpful for skin and urinary tract infections and is also used where hypertension is related to over-heated conditions.