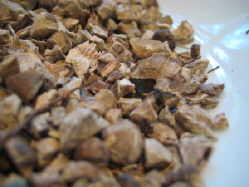 It is considered very useful for treating various types of venous congestion associated with constriction and lack of venous tone, including haemorrhoids, varicose veins, benign prostatis hypertrophy (BPH) and chronic laryngitis. It is diuretic and is a tonic.

It has a distinct odour not unlike a citrus based polish.

The whole plant is used, generally as a tincture, and it can be used in formulas treating gastritis and colitis. Eclectic physicians used Stone Root as an effective gargle for Minister’s throat, an old term for losing one’s voice due to soreness of the throat and over talking!! Hence the reason this herb is used a lot by professional singers, particularly of opera (so we are told) not because they over talk one assumes but for the strain on their voices

The plant was discovered by Peter Collinson (1693-1768), an enthusiastic English merchant botanist, who took great interest in transporting the plant to England and in cultivating new American plants in particular.

Collinsonia was not, however, used in Europe and became popular as a herb much later than Collinson’s time.